official site
Vol.7
Own the Moment
In the ring and motherhood 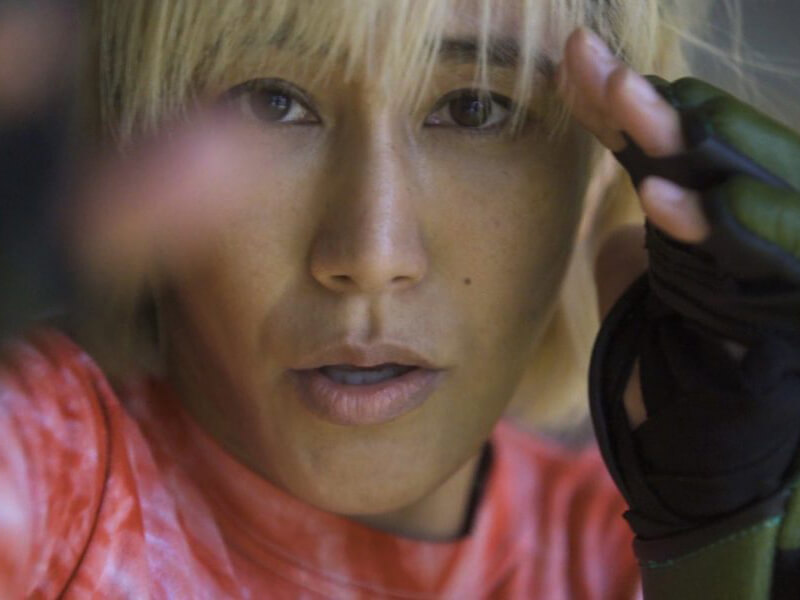 Having won consecutively in national wrestling championships since her early teenage years, Miyuu Yamamoto was the youngest champion in the history to win the World Wrestling Championships. She retired at a young age but came back again, and transitioned to mixed martial arts (MMA) in her forties. Perhaps, her career might seem wild, free-spirited, or maybe even reckless. But is she in real life? Her thoughts and beliefs that she shared with us in our interview were quite the contrary, filled with dedication and profound honesty.
This interview was held in December 2019.

In October 2019, Yamamoto fought against Korean MMA fighter Seo Hee Ham in an event by Rizin, a Japanese MMA organization. As Yamamoto shot for takedowns, Ham used her skills in kickboxing to strike back in the back-and-forth 1st round. The game changed after a minute into Round 2, however, when Ham got on top of Yamamoto and pounded her away until Yamamoto got a cut above her right ear. The fight continued, but as Yamamoto’s bleached blond hair turned increasingly red in her own blood, her movements were lacking precision. Then, after a fierce ground-and-pound action by Ham towards the end of the 2nd round, Yamamoto was defeated by technical knockout (TKO, stopped by referee). Yamamoto was on a roll until this fight, winning four consecutive matches. The defeat was especially disappointing to her, since winning this match would have granted her the right to challenge for the Women’s Super-Atomweight champion belt.

“In the 1st round I scored some takedowns. I know that it wouldn’t have been the most exciting fighting tactic, but if I could keep fighting dirty until the final round, I think I did have a chance of winning.” After her cut above her ear, however, Yamamoto lost her cool. It reminded her of her teammate who lost a match when the doctor stopped the fight because of excessive bleeding from her cut at the “Rizin.13” event the year before. “The cut itself wasn’t a big deal at all. I didn’t need to get it sewed or taped up. But because I saw my teammate lose because of a cut, I panicked, thinking that ‘they’ll stop me from fighting if I go on bleeding.’ I guess that’s why I went back to my old fighting style that Ham had studied so well about me.” There were two occasions where Ham had caught Yamamoto’s leg as she attempted to throw a kick, which she rarely does. “The way I fight is by combining wrestling and boxing. I measure the distance between me and my opponent by throwing jabs, so I guess I was really freaking out to throw kicks like that. It’s unacceptable that I made the same mistake twice in a single match. That’s where I felt my lack of skill and experience.”

Defeats only make you stronger

Because Yamamoto had never suffered from bleeding in her previous MMA matches, she could not remain calm, and her defeat was the result of her lack of experience. Having embraced such a result, Yamamoto is nothing but optimistic. “Through gaining more experiences and facing challenges, I ask myself, ‘do I want to repeat the same thing again?’ I guess I can’t get stronger unless I learn things the hard way. Especially after becoming a mixed martial artist, it’s been a tough ride—I’ve been losing, then losing again, and finally winning. I’m telling you, losing is not the end. I believe that I can get stronger, and that I can win the next fight.” There is no stopping for Yamamoto, learning from her defeat and already preparing herself for the next match—but how would her fans think? “I’m aware that people are curious about me, and there’s no doubt that people see me in all sorts of ways. I can’t control that. But what I can do is to harness all my experiences to make use of them in my next match.” There is no doubt that Yamamoto is a mentally tough athlete, and her straightforwardness is not a reflection of her arrogance or ignorance, but of dedication and determination to be stronger. Even in the press conference after the fight with Ham, she commented, “I am very lucky to have fought against such a strong fighter. Because of this match, I am more confident in myself that I can become stronger. I’m excited to start training as soon as I get home.” As long as Yamamoto is an active athlete, she’s all about staying strong. And nothing else.

Training under a world champ

When we interviewed Yamamoto in November 2019, she was staying in the Kansai region to train at a gym owned by Hozumi Hasegawa, a former world champion boxer who has world titles in three weight classes. Yamamoto had been a fan of boxing, and she had been rooting for Hasegawa during his professional boxing years. She recalls how she was delighted to meet him in person inside a television studio while recording a show. They’ve kept in touch since then, and Hasegawa had told her to contact him anytime should she be interested in boxing. “When I lose a fight, I think about a lot of things, like: what do I need to win the next fight? What do I need to change? So, I thought, now is the time!” And that’s how Yamamoto decided to take that offer and contacted Hasegawa to train under him. “Both Hasegawa-san and I are southpaws – so, I have a lot to learn from just watching his fighting tactics. I also realized that I’m a leftie who really is right-handed, so he taught me a lot about boxing combinations and punching techniques for right-handed southpaws. Not only did our styles match, but he also has this gift of spotting an athlete’s quirks, no matter who the athlete is, and can train them in ways that are best for each athlete. He really picks up on the tiniest things and not only was he an incredible professional boxer, but he is also an amazing trainer. Everything that he’s taught me has been meaningful, and I hope that I can master the moves that he’s showed me.” The combination of boxing and wrestling seems to work for Yamamoto. Combined with stronger punches, feints, and takedowns, her fighting strategy will certainly increase in variety.

In order to perform efficient training routines, athletes also need to remain healthy. That’s why Yamamoto drinks Sun Chlorella A in the morning and after her workouts. “I feel like my body recovers faster now. Even after hard training sessions, my energy is back the next morning. When my body feels good, I can train more and better, and if I can train better, I can build up on my stamina. It’s created a good, healthy cycle for me.” Training under Hasegawa, she is also planning a strategy for her next fight. “I am planning my match assuming that it’s going to be a long fight, so I need to improve on my skills, stamina, and having a stronger mindset. Learning from my previous match, I hope to be the one in control and drag us into the 3rd round.” Let us look forward to Yamamoto back in the ring again, stronger than ever.