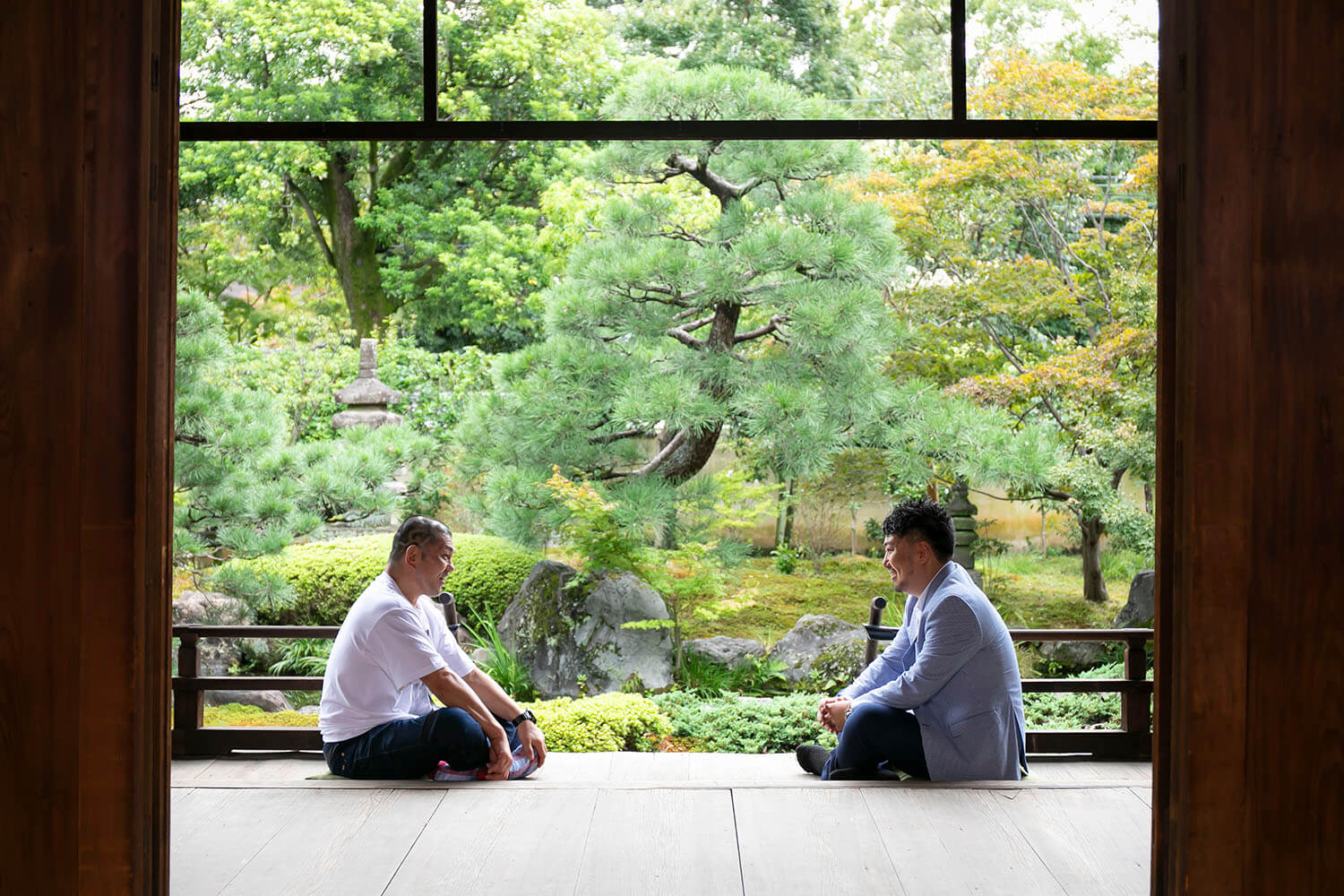 Shortly after peace has finally arrived after the most powerful typhoon in decades has come and gone, a different kind of storm seized the quiet Shōden Eigen’in temple in the Gion district of Kyoto.
Minoru Suzuki is a freelance pro wrestler who challenges pro wrestling promotions all over the world with his own army, Suzuki-gun. Still an active fighter at the age of 50, having just commemorated his 30th anniversary as a pro wrestler, his fan base ranges from children to longtime fans and continues to gain more followers around the world.
Futoshi Nakayama, the President and CEO of Sun Chlorella, is also one of the longtime fans of Minoru Suzuki. The following is a record of an unlimited one-round match between these two professionals.

Still chasing it at 50

Messages for children at the Great Pirates Festival

Nakayama: One of the main reasons why Sun Chlorella has decided to sponsor Minoru Suzuki is that we’re on the same page with you in terms of how you care about children. As a company, the future of children is also one of our important agendas. Could you tell us a bit more about this?

Suzuki: Can I just be really straightforward? I only say what I really think.

Suzuki: First off, children today are living in a world full of lies. And because adults are in charge, children are forbidden from leaping out of that world, and I feel like the walls are getting taller and tougher. That’s why I hosted the “Great Pirates Festival”[*] last June in Yokohama – my hometown – to destroy that wall. I wanted it to be an event where I could show these children who I am. If there was one kid in the audience who wanted to be a pro wrestler, the best thing I could do for that kid is to show myself fighting in person. It would be great if they got something out of it and believe in themselves, instead of listening to what their parents or teachers have to say about their dream.

Nakayama: What inspired you to have that kind of perspective ever since you were a child?

Suzuki: Pro-wrestling, for sure. I was 15 when I decided that I wanted to be a pro wrestler, but it’s not like I was into fighting. I’ve never gotten myself into fist fights before – in fact, I was getting bullied. Like, no one wanted me on their team when we were playing baseball because I was a big guy. They called me I was slow and said that they’d lose if I’d be on their team. So, I spent a lot of time alone, throwing balls against the wall.

Suzuki: Yep. But when I told my parents that I wanted to be a pro wrestler, they said, “that’s a special kind of world that you see on TV and it’s not a place you should go.” But then I thought, “well, what if I’m special?” And that was when I started to care less about what others had to say, and that way of thinking changed my life completely. I realized that if I continued to listen to adults, then there was no way I could be someone bigger than them.

Nakayama: What you’re saying is convincing because you’re Minoru Suzuki, a great fighter with many achievements …

Suzuki: It’s not like you should be winning games to say what I’m saying now. Hey, I wasn’t always winning either. What’s important is to keep doing it until you win. It’s as simple as that. But most people just don’t do it.

Nakayama: You’re probably right. As long as you don’t stop, then it’s not like you’ve lost.

Suzuki: It’s so easy for people to say that you’re talented or you have a knack for this and that, but that’s just an excuse. For example, I’ve never touched a computer until I learned how to use it about 15 years ago, and now I’m designing my own T-shirts on Illustrator!

Nakayama: That’s right! You’re a designer of your own merchandise and your fashion brand, Piledriver.

Suzuki: If I wanted to put in some calligraphy, then I’d go ahead and pick up a brush, although I’ve only done Japanese calligraphy when I was a student. But if you really wanted to achieve something, then there’s nothing you can’t do.

Nakayama: Is there anything you’re being careful about in terms or your diet and workout, now that you’ve been an active athlete for 30 years at 50 years of age?

Suzuki: It’s basically something I need to keep doing all year round, so I’m not doing anything too strict. For example, if I ate too much high-calorie foods the night before, then I reduce my calorie intake the following day while making sure I’m getting enough nutrients, and that’s how I make adjustments.

Nakayama: Are you being more careful now, or when you were with Pancrase (an MMA promotion company co-founded by Minoru Suzuki)?

Suzuki: Now, without a doubt. I fought only 3 or 4 matches a year when I was an MMA fighter, so I arranged my workout and mental training routines in such a way to bring both my physical condition and spirit at peak level during the actual match. I fight every day, now that I’m a pro wrestler, which means that I need to be in control of my diet and fitness all the time.

Nakayama: Are the amount and quality of your workout routine any different from when you were younger?

Suzuki: I think I’m using my time more efficiently compared to when I was younger. What I realized recently is that I feel like I’m an organized library with books neatly arranged in alphabetical order. Like, if I utter the first letter of a title, the book just automatically comes out in front of me

Nakayama: You mean that you’re able to react faster.

Suzuki: Like, if I do 10 kicks at practice, I don’t just kick, I’m also analyzing my moves every single time. And when I throw a bad kick, I can immediately understand what went wrong and adjust my moves right at that moment. So even if my workout menu is the same as other pro wrestlers, I’m getting so much more out of one practice session compared to them.

Nakayama: When I think about how you fight, it’s not like you jump off from a high place, turn in mid-air, or do other complex techniques. It seems as though you’re perfecting the basics. Pro wrestlers who can excite the audience by using only basic forms of attack are very rare these days, and your style is also what defines you as the one and only fighter.

Suzuki: I’ve heard that pro wrestling fans in the world think highly of my style too.

Looking ahead with Sun Chlorella

Suzuki: My relationship with Sun Chlorella began when you sponsored our Great Pirates Festival event. Until then, I’ve known about the brand, but didn’t really know what it was. So, I did my own research and found out that it’s much better than taking vitamins. And then you gave me some and I started drinking it for the first time and now, I carry it with me everywhere –I make sure to bring it with me especially when I’m travelling.

Nakayama: Thank you. I feel very honored to hear that coming from you, Minoru Suzuki, a pro wrestler I respect.

Suzuki: Like I said, I’m the type of guy who only says what I really think, so I mean it and I’m not trying to flatter you. I drink it every day. I’m telling you I’ve been pooping green …

Nakayama: What about your future goals, is there anything else that you would like to accomplish?

Suzuki: The pro wrestler that I am now, nobody else has done it before. There’s no one in my path who’s walked ahead of me. Rikidōzan, Antonio Inoki, Giant Baba – none of them were active pro wrestlers when they were my age. Nobody has ever been a top-level pro wrestler fighting for championships at the age of 50. That’s why every step I make is leading me to a new path, and I’m having so much fun with it.

Nakayama: You’re not just continuing to be an active athlete, but you’re making history.

Suzuki: Yep. Every single one of my competition are in their 20s or early-30s, so they’re getting younger than me year by year. Kazuchika Okada[*] is 30 years old now, which means that I’ve been doing this since he was born.

Nakayama: When you put it that way, you’re really quite impressive.

Suzuki: No, not really. I just do what I need to do, that’s it. I haven’t changed one bit since I dreamed of becoming a pro wrestler when I was 15. Everybody else at my age have their own reasons why they can’t continue. But I did. I sacrificed a lot of things too. That’s why I’m here now and I don’t regret a thing. This is something I want to tell not only the people of my generation, but children too.

Suzuki: Likewise! Really, my body’s been feeling great since I began drinking them. Minoru Suzuki starts taking Sun Chlorella at the age of 50, and still an active pro wrestler fighting for the top at 60! That would be a dream come true.

*Kazuchika Okada: A popular pro wrestler, also known as the “Rainmaker.” He fought against Minoru Suzuki at the Great Pirates Festival.

Minoru Suzuki
Born in Yokohama City, Kanagawa Prefecture on June 17, 1968.
Suzuki was a member of his high school’s wrestling team and was a runner-up in the National Sports Festival. He made his New Japan Pro-Wrestling (NJPW) debut as a professional wrestler on June 23, 1988. After his affiliation with the Universal Wrestling Federation (UWF) and the Pro Wrestling Fujiwara Group, Suzuki established the mixed martial arts promotion company Pancrase with Masakatsu Funaki in 1993. In May 1995, Suzuki became the second fighter ever to win the King of Pancrase title. In June 2003, he fought in a NJPW match for the first time in 14 years. Teaming up with Yoshihiro Takayama, they won the 46th IWGP Tag Team Championship. After that, he mainly fought in All Japan Pro Wrestling and Pro-Wrestling Noah. In 2010, Suzuki returned to NJPW and established “Suzuki-gun”. With Taka Michinoku, Taichi, and Lance Archer, they are taking the New Japan mats by storm. In 2018, Suzuki won the 17th IWGP Intercontinental Championship. Minoru Suzuki’s life dedicated to martial arts has always been a tumultuous one, which is why he fights unforgettable matches that burn into our memories.